Our “adopted” school for 2015-16 is Bellsbank Primary School, Dalmellington. During the year we have exciting activities lined up and we will keep you informed as we go along. All the activities with Bellsbank this year will be financially supported by the generosity of members of KESS, the Institute of Physics and the Scottish Association for Metals.

Bellsbank Primary School has a number of pupils who are talented in art. Accordingly, with the help and support of KESS, these pupils have been challenged to organise and present an exhibition of art to depict the rich scientific and industrial heritage of their surrounding area. In addition to teachers and classroom assistants, the pupils will be helped by Jim Porter, a well know local artist who often delivers lectures to local interest groups on the subject of “Art in the Industrial Revolution”. Also, through the kind financial support of the Institute of Physics, the Scottish Association of Metals and members of KESS the pupils have been equipped will all the material they will require to create the artwork for the exhibition. We plan that the exhibition will happen around Easter 2016 and be exhibited to parents and the general communities of Bellsbank and Dalmellington. The planned outcome of this activity is that it will give specifically artistic pupils an opportunity to share in and contribute to the school’s collaboration with KESS and bring together the school and its local community. 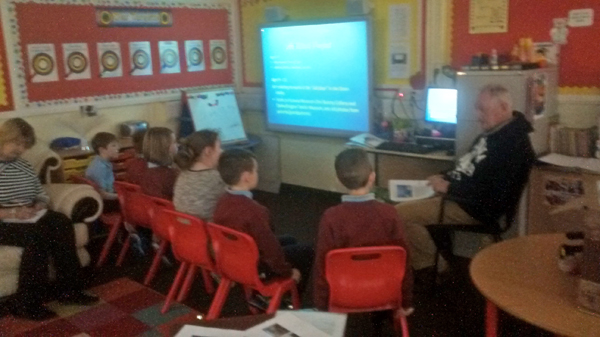 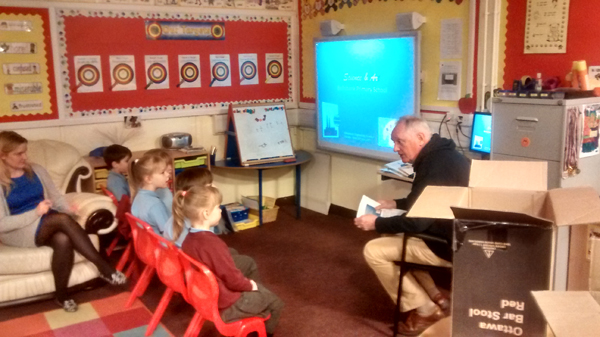 The first activity was a visit to the school by Archie and Catriona Thom of the Ayrshire Railway Preservation Group (who are owners and operators of the Scottish Industrial Railway Centre, Dunaskin) on Thursday, 22nd October 2015. During that visit Archie Thom told the P6 and P7 pupils about the rich industrial heritage of the Patna and Dalmellington area, particularly with respect to iron manufacturing which was fed by the coal and iron ore mines. Archie’s talk to the pupils was illustrated by pictures showing the industrial landscape of the area in the late 19th and early 20th centuries. Central to these industries was the industrial railway network which is now preserved by volunteers.

The pupils were left in no doubt that, although all the industry from their area has now vanished, at one time it was a thriving area of railways, coal and iron.

At the end of his talk, Archie and Catriona invited the pupils to visit the Scottish Industrial Railway Centre at Dunaskin which is only a few miles from Bellsbank. Accordingly the pupils and teachers duly did on Tuesday 10th November 2105.

During the visit, the pupils were given a tour of the locomotive fitting shed where all the restoration work is carried out and had a short lesson in the Museum Room. They saw the remains of the iron works and were given a trip on a brake van pulled by a restored industrial steam locomotive along the same route which carried the coal to the iron works all those years ago. Finally the pupils were then taken in pairs onto the footplate of the locomotive and received an explanation of the engine, boiler and controls. The pupils and staff had a wonderful and informative afternoon and were left with a deep appreciation of the industrial environment in which their ancestors were employed and brought up.